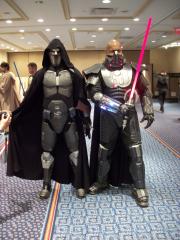 Dragon Dronet is a weapon specialist, armorer, actor, and prop master who has worked in Hollywood for decades.