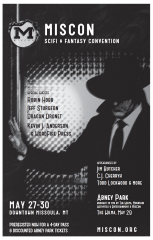 MisCon 29’s wasteland is a dim memory, now. Today’s bustling convention is filled with factions, each working to rebuild society as they see fit.

MisCon has risen from the ashes!

Will you join the intrepid League of Explorers with their clockwork suits and foolhardy flying machines? Or if exploring the ruins of Old New York isn’t your thing, maybe you can help the neutron-powered Superhero Society clean up MisCon’s seedy underbelly and stop the Syndicate from smuggling contraband into the convention.

Of course there’s always the Bavarian Fellowship, those friendly fast-talking foreigners who only want to bring utopia back to MisCon. Watch out for them, though. I hear they’re actually spies trading in secrets and atomic tech.

If you’re not sure where you fit in, you might hire a fedora-wearing private eye. Seems like there’s a hardboiled detective looking for work in every gin joint in the city.

Join us at MisCon 30, sip a few drinks at Rick’s American Cafe (Cafe Americain), and dance the night away. Fedoras and trenchcoats optional.