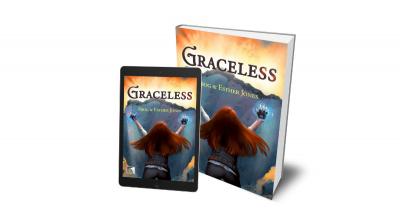 Esther has always loved creating fantasies, but only began writing with Frog after winning a short story contest in 2011. She is the owner and president of Impulsive Walrus Books, and the author of many short stories and novels. By day, Esther is a legal assistant editing others' work, but by night she's an author that has also ghost-written for blogs, movie reviews, and many other sites. She loves cooking good food, Asian pop-culture, and puttering around killing plants in her garden, if she's not already too busy killing her characters.
In order to prove to herself that she could still write a short story, she set herself a goal of entering the SpoCon League of Extraordinary Writer’s competition. To do so, Esther consulted with Frog, and about her story idea and began generating the world that would eventually envelop The Gift of Grace series. The short story she produced as a result not only entered, but won that competition.

Following that, Esther has collaborated with Frog on The Gift of Grace, opened a small press publishing house known as Impulsive Walrus Books, and written for the nerd culture media site Unified Nerd Theory, as well as many other projects. Her interest in writing has driven the team of Frog and Esther to heights that neither could have reached alone.