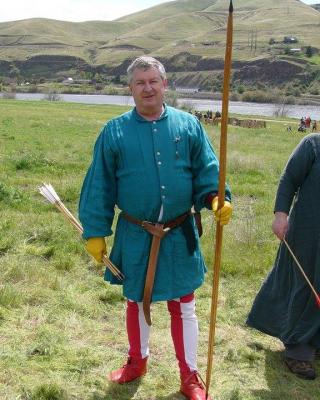 I come from Portland, Oregon. Attended Benson Polytechnic and entered the Army in 1966, trained as a helicopter crewchief. Went to Viet Nam in 1967 and flew over 1000 combat hours in UH-1"Huey" helicopters. Was shot down and captured in 1968 and released in 1973 following the Paris Agreements. Graduated with a BA in Anthropology in 1978 from American University in Wash. DC. Worked at National Museum of Natural History and National Air and Space Museum as a Museum Technician until 1983. I moved to Hawaii in 1983 and work at the US Army Museum of Hawaii and later for the National Park Service at the USS Arizona Memorial at Pearl Harbor. I was the curator at Grant-Kohrs Ranch National Historic Site, Deer Lodge, Montana. In 1995 I became the curator at Nez Perce National Historical Park and will retire in 2017. I studied Japanese archery (Kyudo) in Hawaii and began researching and studying Medieval Archery in 2005 thru Realms of Avalon and later the SCA. I collect bows, and make arrows from various periods and cultures based on archeological evidence and site visits to museums. I also research and make models of historical water craft with a special interest in pre-viking and Viking era ships, medieval coastal craft and cogs (Kogges).

Robert Chenoweth is not yet scheduled for any programming.