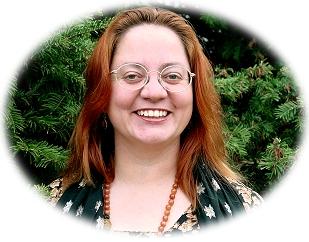 Patty was born in Montana, and lived here until she learned to read. Then she lived in many places including Regency England, the land of faerie and interplanetary space - although her parents insist that her body remained peacefully at home.

Books have been her most faithful companions and stalwart friends, with the possible exception of a small number of horses, dogs, and cats. This is reflected in an interior decor which looks vaguely like a bookstore clashed with a tornado.

She attended Montana State University, not far from her hometown. While there, she married her high school sweetheart, had a baby and graduated with honors and two degrees. Having earned degrees in German and History, her career future was as bleak as education could insure, but her skill in Trivial Pursuit became legendary.

Following her aquatic biologist husband, she moved to the TriCity desert shortly before STEAL THE DRAGON came out from Ace in 1995.

While in the Tri-Cities she was introduced to conventions (RadCon 2 being her first). She was delighted with the entire event. Make a point of saying hello, she is one of the most friendly and outgoing people you are likely to meet.

Patricia Briggs is not yet scheduled for any programming.