Discussion of game-related topics. Usually these panels deal with role-playing games like Dungeons and Dragons, Pathfinder, Shadowrun, GURPS, Deadlands, Call of Cthulhu, Amber, and many others.

General Manager of "Muse Comics and Games." I GM several game demos and manage our stores table in the merch room.

Jim Butcher is the author of the Dresden Files and the Codex Alera series. He is a martial arts enthusiast with fifteen years of experience in various styles including Ryukyu Kempo, Tae Kwon Do, Gojo Shorei Ryu, and a sprinkling of Kung Fu. He is a skilled rider and has worked as a summer camp horse wrangler and performed in front of large audiences in both drill riding and stunt riding exhibitions.

Erik Evjen is the founder of IGRE Publishing, an independent Table Top Gaming and Entertainment Imprint. As the Lead Game Designer for IGRE, Erik is currently working on developing the Sword Land RPG System and the Iellos Campaign Setting. He has also contributed a number of articles to the EN World En5ider program. As an author, Erik scribed the Songs of Ahrea series, and is currently adapting the series into an ongoing web novel and web comic.

Dean has been running/playing RPGs for 30 years.

I help run MisCon, which occurs each year on Memorial Day Weekend in Missoula, Montana, thanks to the wonderful people who make it happen.
I run games, primarily Call of Cthulhu, GURPS and other Steve Jackson Games products and various games from Cheapass Games.
As a semi-professional nerd, I believe geekery and gaming can have positive effects on math, reading and writing, and social interaction skills as well as family togetherness. 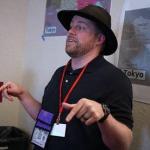 Greg is a life long gamer and has been running events at Miscon for the past twenty years. He has run a game store, run a gaming convention, written a gaming column, been president of a gaming club and started Black Shield Productions, a gaming event company. Greg is currently working on Fantasy Live, a live action D&D style role-playing game and will be hosting a prototype of Fantasy Live Friday and Saturday nights.

An experienced gamer and GM, having run long-term campaigns in multiple systems, I've been role-playing since 1983, and running games since 1986. Of course, those first games were pretty off the wall and unstructured - so nothing's really changed.

Brooke H. Stanley, RN is modern day Bard. Scrapping, skulking and schmoozing are reoccurring themes in his as yet never ending story. With Bachelor’s degrees in English and Nursing as well a fist full of apparently useless graduate work he is both over educated and very friendly. Stanley has been burned, shot and driven for spymasters and U. S. Presidents. In 2016, he was named Arctic Logistics Officer for Team Monkey, an international research organization devoted to the advancement of Anthropoid/Simian commensalism (for realsies!) He has a lovely singing voice and likes both cats and dogs equally.