These panels include everything related to writing. Most of the time famous authors are the ones talking,l giving you tips on how to get published. They discuss craft, the publishing business, etc. They include MisCon's Writers' Workshop.

M. H. (Maggie) Bonham is an award-winning author and editor of more than 35 books and thousands of short pieces. She is the publisher of Sky Warrior Book Publishing LLC. She is also the author of the bestselling novels Prophecy of Swords, Lachlei, and Howling Dead.

Patty writes books. You can find a complete list of titles elsewhere. You probably don't really care where she was born [Butte, MT] or what her favorite animal is [horse]. The list of jobs she's held over the years doesn't tell you as much about Patty as it does about which jobs were available at various times in our past. I could fill pages with various facts and tallies that detail the events of her life. Instead, I'd like to tell you a bit about who she is.

Jim Butcher is the author of the Dresden Files and the Codex Alera series. He is a martial arts enthusiast with fifteen years of experience in various styles including Ryukyu Kempo, Tae Kwon Do, Gojo Shorei Ryu, and a sprinkling of Kung Fu. He is a skilled rider and has worked as a summer camp horse wrangler and performed in front of large audiences in both drill riding and stunt riding exhibitions.

Brenda’s Carre writes both long and short fiction. Her work can be found in the Magazine of Fantasy and Science Fiction, Fiction River Anthologies, Pulp Literature Magazine and in a variety of collaborative works. Brenda challenges herself to write in many genres but with a harkening to native mythologies and the ‘supernatural’ Pacific Northwest where she lives. Find her at www.brendacarre.com

Diana Pharaoh Francis writes books of a fantastical, adventurous, and often romantic nature. Her award-nominated novels include The Path series, the Crosspointe Chronicles, the Diamond City Magic books, and the Mission: Magic series. Her novels have been translated into German and French. She holds a Ph.D. in Victorian literature and literary theory, and an MA in fiction writing. She’s been teaching for more than 20 years. She’s a member of SFWA and NINC. She’s owned by two corgis, spends much of her time herding children, and likes rocks, geocaching, knotting up yarn, and has a thing for 1800s England, especially the Victorians. For more about her writing, visit www.dianapfrancis.com.

Jim won the Golden pen award of wotf in 1991, has published ten novels and over sixty stories in magazines and anthologies. He is a retired physics professor and dean. His most recent novel, SYNTHS, came out in November of 2018.

Charlaine Harris has been a published writer for over thirty-five years. She has written conventional mysteries, hard-edged mysteries, urban fantasy, and science fiction.

Her Sookie Stackhouse books were adapted to the HBO series True Blood.

Her series "Midnight, Texas" was adapted to the NBC show of the same name. It follows the lives of the strange inhabitants of a small town in the middle of nowhere, where the concept of normal is relative. A haven for vampires, witches, psychics, hit men, and others with extraordinary backgrounds, Midnight gives outsiders a place to belong.

Andrea Howe has been adeptly wrangling the written word for two decades. As a freelancer, she has edited books for such notable publishers as Wizards of the Coast, McGraw-Hill, and Random House as well as for individual authors. She has been called a "natural" and truly enjoys her work. She offers tips and tools for writers on her Web site and posts fun tidbits about language and grammar on her Facebook page. More information can be found at www.bluefalconediting.com and www.facebook.com/bluefalconediting.

For more than 20 years, Jeff worked in publishing, focusing on newspapers, magazines, blogs, and newsletters in such diverse subjects as aviation and aerospace, sports, automotive, and the outdoors. From staff writer to editor, Jeff has worked across all facets of publication production on a national and international scale.

Esther Jones began life as a strange, fey child who always made up her own bedtime stories– and sometimes– even managed to scare her parents with them. At some point during her childhood, she decided she would grow up to be a world famous illustrator of fairies or a poet. But during college, as a concession to providing herself with future food and clothing, switched her major to a technical communications degree instead. She wrote legal briefs, grant proposals, business brochures, and similar documents, but didn’t pick up a pen creatively for a decade after abandoning her poetic hubris.

In order to prove to herself that she could still write a short story, she set 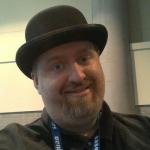 Frog Jones writes alongside is wife, Esther Jones. Together, they appear in numerous anthologies and are the authors of The Gift of Grace series. He is also the acquisitions editor for Impulsive Walrus Books and a staff writer and podcaster for Unified Nerd Theory.

I help run MisCon, which occurs each year on Memorial Day Weekend in Missoula, Montana, thanks to the wonderful people who make it happen.
I run games, primarily Call of Cthulhu, GURPS and other Steve Jackson Games products and various games from Cheapass Games.
As a semi-professional nerd, I believe geekery and gaming can have positive effects on math, reading and writing, and social interaction skills as well as family togetherness.

Joyce Reynolds-Ward is a speculative fiction writer who splits her time between Enterprise and Portland, Oregon. Her short stories have appeared in Well…It’s Your Cow, Children of a Different Sky, Steam. And Dragons, Allegory, River, and Fantasy Scroll Magazine, among others. Her books include Shadow Harvest, Alien Savvy, Netwalking Space, Pledges of Honor, Challenges of Honor, and Klone’s Stronghold. Projected 2019 book publications include Beating the Apocalypse and Choices of Honor. Joyce has edited two anthologies, Pulling Up Stakes (2018), and Whimsical Beasts (2019). Besides writing, Joyce enjoys reading, quilting, horses, skiing, and outdoor activities.

Brooke H. Stanley, RN is modern day Bard. Scrapping, skulking and schmoozing are reoccurring themes in his as yet never ending story. With Bachelor’s degrees in English and Nursing as well a fist full of apparently useless graduate work he is both over educated and very friendly. Stanley has been burned, shot and driven for spymasters and U. S. Presidents. In 2016, he was named Arctic Logistics Officer for Team Monkey, an international research organization devoted to the advancement of Anthropoid/Simian commensalism (for realsies!) He has a lovely singing voice and likes both cats and dogs equally.

Patrick Swenson edited Talebones magazine for 14 years, and he still runs Fairwood Press, a book line, which began in 2000. A graduate of Clarion West, his first novel The Ultra Thin Man appeared from Tor. The sequel is The Ultra Big Sleep. He has sold stories to the anthology Unfettered III, Like Water for Quarks, and magazines such as Marion Zimmer Bradley’s Fantasy Magazine, Figment, and others. He runs the Rainforest Writers Village retreat every spring at Lake Quinault, Washington. He's been a high school teacher for 35 years. He lives in Bonney Lake, Washington with his son Orion.

Krista writes novel length and short fiction, primarily in the fantasy genre, but also dabbles in science fiction, crime and romance. She writes in a closet in Port Coquitlam, BC. Her story "To Serve and Protect" appears in the Aurora-nominated 49th Parallels anthology, (Bundoran Press), and she also has work in Pulp Literature and Electric Spec. She has been a finalist in several contests (SiWC, PNWA, Colorado Gold), and won a couple of them (Pulp Literature, Fraser Valley Writers). Her theatre background has led her to being Musical Director for highschool productions (Rent, In the Heights, Anything Goes, etc.), to co-create a play with her husband and two offspring in the Victoria